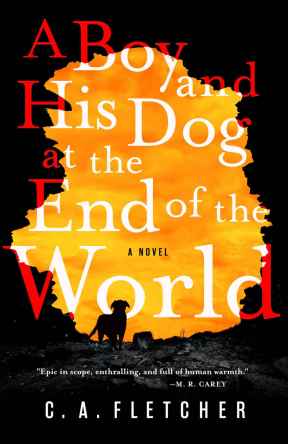 My name’s Griz. My childhood wasn’t like yours. I’ve never had friends, and in my whole life I’ve not met enough people to play a game of football.

My parents told me how crowded the world used to be, but we were never lonely on our remote island. We had each other, and our dogs.

Then the thief came.

There may be no law left except what you make of it. But if you steal my dog, you can at least expect me to come after you.

Because if we aren’t loyal to the things we love, what’s the point?

I never thought I’d be using “cozy” and “huggable” to describe a post-apocalyptic book…and yet here we are. I went into A Boy and His Dog thinking it’d be a story about the celebration of dogs against an end-of-the-world backdrop.

It’s a story about the celebration of life.

This book tackles the end of the world from an angle that I haven’t seen before in the genre, and I think what it achieves for post-apocalyptic fiction is similar to what Life is Beautiful achieves for Holocaust ones–taking what is traditionally a grim subject matter and injecting it with an astonishing amount of hope and goodness. And you can hurl the exact same criticisms for A Boy and His Dog that people do for Life is Beautiful: that it’s not dark enough, that it doesn’t portray all the horrors of the situation, that it’s too positive and hopeful.

But you know what? I don’t think there’s such a thing as too positive and hopeful. Not with stories like these.

Griz’s narration is everything. It’s companionable and warm, like you’ve been friends for your whole lives and this is just a story that he’s telling you over a breakfast table. And it’s laced with empathy and introspection that I think most book lovers can recognize and fall in love with. And he does this thing where he gets a certain feeling from looking at something or experiencing something, but he can’t quite explain it with plain adjectives, so he tries to describe around it using imagery and comparisons to other things, and I just had to pause and stare at my tablet because it reminded me so much of myself and I rarely come across characters who think like this.

But the most brilliant part of the story is how Griz rebuilds this ruined world into something new–something quiet yet wondrous–just through his narration. He comes across empty bridges and crumbling buildings and old dusty records, but he doesn’t see them as the loss of a civilization. He doesn’t think, “Look what’s become of humanity.” He thinks, “Look what humanity has achieved.” It’s one of the most beautiful examples you can get of a character creating the world.

Surprisingly (or not surprisingly), there aren’t a ton of speculative book characters that I actually want to pull into this world and be best friends with. But with Griz? Sleepovers, baking sessions, camping trips, movie nights, book discussions–I want to do them all because he is my kind of people.

That being said, I did want more scenes of Griz bonding with his dogs; I kind of thought this would be a dog story first, post-apocalypse second, but the dogs felt more like catalysts for plot development than actual characters. And the ending wasn’t as meaty as I’d hoped it would be. I wouldn’t say “disappointing” but I was expecting something with a bit more impact. I think these complaints are fairly small in the grand of scheme of things, though.

A Boy and His Dog is the feeling of snuggling under your blanket fort, listening to the rain patter outside. A book that shines a light on the small everyday things we take for granted and says, “How magical. How beautiful. How extraordinary.” And if the world ends in a fiery inferno tomorrow, I’ll rest happily knowing that Griz will be narrating the life that comes after.

Review copy provided by the publisher via Netgalley

23 thoughts on “Review: A Boy and His Dog at the End of the World – Like a Warm Blanket of Hope”