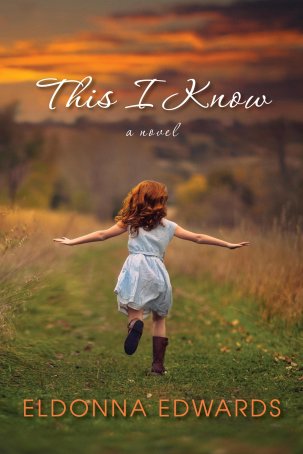 This is the first score below 5.0 I’ve given on this blog, so I think a little preamble is in order to mark the occasion. Objectively, this isn’t a terrible book–the prose is nice, the protagonist is engaging, and so forth. But I think the phrase “objective review” is an oxymoron. Once a piece of media content enters your brain, it automatically becomes subjective. No two people experiences anything in the exact same way. My neural map is different from your neural map.

So subjectively speaking? This I Know is a mix of historical fiction, paranormal, and coming-of-age that sounds fantastic in premise but suffers in execution and left me grinding my teeth in distaste.

Set in 60’s and 70’s midwest U.S., it stars an eleven-year old girl named Grace who is rather quite extraordinary. First of all, she has an ability that she calls “The Knowing,” though others may call it clairvoyance or telepathy. It works as it sounds–Grace knows things most people don’t. She can pick up people’s stray thoughts, their desires, and even their future–like what bra size a girl would end up wearing as an adult. Secondly, she’s connected to the spirit (or soul) of her twin brother who had died shortly after birth–and by “connected” I mean “have full conversations with.” The story is about Grace struggling to find her place in a family and town that views her with skepticism and fear.

There’s a lot to like in the first half. Grace’s narration is incredibly charming and funny without coming across as cheeky. She does sound a little too mature for an 11-year old at times and I oscillated between “This narrative voice is so great!” and “No kid thinks like this, however psychically gifted they are.” She uses words like “dilapidation” and complex metaphors that many adults wouldn’t even think of. After a while, though, I ended up burying my skepticism and started enjoying it for what it was. And Grace is an easy character to love. She’s a compassionate girl with a great sense of humour and I love the way she picks out the small details in people–the interesting descriptions she pastes onto their looks and personalities.

Earl is a farmer who spends a lot of time in the sun. The back of his neck has crisscross crinkles that make me want to stick cloves in it like an Easter ham.

The plot–there isn’t much of it. Most of the story deals with Grace’s daily life in town as she helps out people and tries to fit in among her somewhat dysfunctional family. While this doesn’t normally bother me in coming-of-age stories, my problem with This I Know is that it half-heartedly tries to throw in a plotline–a mystery regarding a man who’s been assaulting young girls around town– in the last 20% of the story. A half-formed, uninteresting plotline that fizzles out in the very definition of anticlimax.

Also, the side characters lack depth. Grace’s father starts out as a fire and brimstone preacher, strict to the point of stifling, and a neglectful father. He continues that way up until the very last moment where he does a complete 180 and becomes a changed man. Grace’s three sisters spend most of the story picking on Grace and not much else. As for the mother, it would have been great to see her postpartum depression explored further but unfortunately, she’s very much absent for a large chunk of the book.

Third and final point, and what ultimately ended up plummeting the score: queerbaiting. I was so sure that Grace was going to come out as queer by the end of the book–if not to the town, then at least to herself. Throughout the book she’s constantly noting how amazing and gorgeous other girls are and admiring their figures and wanting to touch their breasts. But then, near the end, when her best friend Lola kisses her, she recoils and says (to paraphrase), “Sorry but no. Being gay is a sin.” Which is rather rich coming from a girl who can see the future and talk to dead people. If that doesn’t get you tossed into Satan’s fiery pits, I highly doubt kissing a girl would. There is little point to this scene except to shove Lola into the role of a temptress and Grace into the role of the pure Christian girl who is Definitely Not Gay.

But what really put the final nail on this coffin is the ending (minor spoilers here), where we find out that Grace eventually gets married to a boy named Robin who appears in a total of two short scenes throughout the entire book. They marry, build a house for themselves, have a beautiful baby boy, and live happily ever after. I nearly threw my tablet in disgust at this point.

The obvious lesson we’re supposed to take from this story is that we should examine the world with an open mind and treasure our differences. But in a story where heteronormality is celebrated at the expense of LGBTQ characters, such lessons come tainted with hypocrisy.

Thank you to Netgalley and John Scognamiglio Book for providing a review copy.

10 thoughts on “Review: This I Know – Psychics and Queerbaiting in 70’s America”