Here’s a fun stat for you: I DNFed 5 books in the past month and a half, and four of them were YA SFF. And I’m pretty sure they’re at least 60% responsible for the reading slump I’m currently in.

1) Recent YA SFF is just missing a lot of the stuff I crave. Also, I should be more selective about the books that I request, and for god’s sake, read some reviews beforehand.

You say “steampunk” and “divided loyalties” and “cat and mouse” and “queer”; I say,  “Please–I offer you my first born.”

Well, I hope the bookish gods accept cancellations because Tarnished are the Stars is definitely not worth my first born. Or any of my born for that matter.

I always say that I can forgive poor worldbuildng if I’m able to connect with the characters. But there’s a limit to that. And my limit is this book. I found the writing to be so sparse of detail to the point where it felt like a slice-of-life contemporary than a sci-fi–heavy with dialogue and a vague sense of setting, which isn’t at all helped by how short each POV chapter is.

And a slice-of-life-esque worldbuilding is fine if the story itself is slice-of-life. This book? Nothing close to that. It’s a steampunk space opera with intrigue and a organics-versus-technology plotline, and therefore I want to see something more than Scene A – generic store, Scene B – generic mansion, and Scene C – generic field.

Now, this next book has the exact OPPOSITE problem. So at least my DNF reads were…varied? Yay? 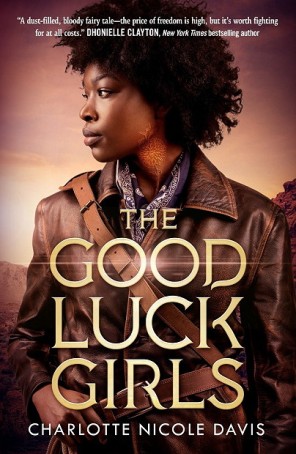 ME: So, it’s kind of weird how there are no characters in The Good Luck Girls…but at least the setting is neat!

ME: Uh, what do you mean I’m looking at the characters?

Ah yes. The good old problem of “interesting worldbuilding, flat/invisible characters.” This is a more familiar territory for me.

Let’s get to the positive first: the worldbuilding and the general premise of the story is super fascinating. There are two groups of people who live in Arketta, dustbloods and fairbloods, and they’re more or less alike in appearance minus one little detail: dustbloods don’t cast shadows. And while fairbloods are offered privileges and opportunities, dustbloods are forced to live in indentured servitude–as prostitutes, for example, which is what the Good Luck Girls are.

The writing itself is really solid and descriptive, and all the little details about the setting are a nice touch. Also, copious descriptions of food equal a very happy Kathy.

All of this was negated by the characters. Holy friggin’ coconuts, the characters. You have this cool western setting–rich and dusty and unforgiving–and it’s somehow populated with characters with less personality and depth than the back of a cereal box. They were just…blank. And eerily so. I couldn’t find myself caring about any of them, or their predicament, and well, that was that.

So. What books should I pack for my Wendigo-hunting trip? And what’s your go-to remedy for bookish curses?

(I’ve been a BIT sleep-deprived this week–I don’t know if you can tell??)

21 thoughts on “DNF Reviews: Tarnished are the Stars & The Good Luck Girls – Why does YA Hate Me? (I’m Open to Suggestions)”