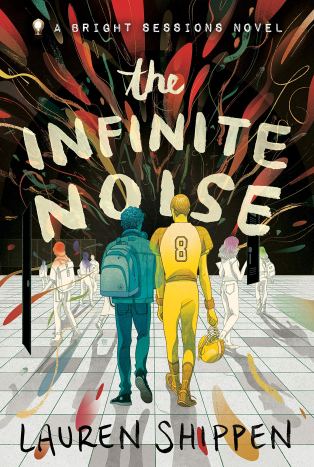 Caleb Michaels is a sixteen-year-old champion running back. Other than that his life is pretty normal. But when Caleb starts experiencing mood swings that are out of the ordinary for even a teenager, his life moves beyond “typical.”

Caleb is an Atypical, an individual with enhanced abilities. Which sounds pretty cool except Caleb’s ability is extreme empathy―he feels the emotions of everyone around him. Being an empath in high school would be hard enough, but Caleb’s life becomes even more complicated when he keeps getting pulled into the emotional orbit of one of his classmates, Adam. Adam’s feelings are big and all-consuming, but they fit together with Caleb’s feelings in a way that he can’t quite understand.

Caleb’s therapist, Dr. Bright, encourages Caleb to explore this connection by befriending Adam. As he and Adam grow closer, Caleb learns more about his ability, himself, his therapist―who seems to know a lot more than she lets on―and just how dangerous being an Atypical can be.

First of all, if you haven’t check out the The Bright Sessions podcast, please please please do so. From a bird’s eye view, it’s a story about superpowered people attending therapy, but really it’s so much more than that.

Second of all, I highly, highly recommend listening to the audiobook for this (narrated by the VA’s who play Caleb and Adam in the podcast). That might be presumptuous, seeing as how I haven’t even tried the audiobook version yet, but…. *whispering* Shippen’s prose just isn’t as engaging in print form as it is in audio form (TBS fans can skewer me for that). I mean, it’s fine–very casual and conversational, which fits her teenage characters–but it’s also kind of plain, and I had a hard time differentiating between Caleb and Adam’s narration. And a multi first-person POV book in which the narrators blend together is Kiss of Death territory for me.

Caleb is the jockish empath with the heart of gold, kind in a way that obliterates the typical jockish stereotype (I would go to war for him), and Adam is the quiet bookish boy who’s dealing with more mundane but still very real demons of his own. It was nice to see a more in-depth look at their relationship that we don’t get in the podcast. Shippen nails the messiness of being a teenager, psychic or otherwise, and her descriptions of anxiety and depression are some of the best I’ve seen.

It’s not dark, it’s…the absence of light. Like some sort of void. It doesn’t weigh down on me, suffocate me. It’s empty–just total nothingness. But it’s sucking me in and I feel like if I go inside of it I’ll stop existing entirely, and that scares me but at the same time it would be a relief.

The Infinite Noise talks about feelings–their shape, their depth, their colour–probably more than any other speculative book I’ve read. And I so, so appreciate that, not only because rifling through emotions and assigning imagery to them is something I always do (because that makes it easier for me to process them), but also because it goes such a long way towards normalizing vulnerable masculinity in media.

So the majority of the story is slow-burn relationship building with bits of sci-fi elements, which is good. The last 10% or so is really where things fall apart for me. And most of that has to do with the structure of the podcast, and how some of it doesn’t translate to a two-POV book environment. Sequences that are interesting and well-paced in the podcast come across as incredibly abrupt and jarring here, and…I don’t know, I just think the book could have benefited from an extra 40-50 pages to flesh things out.

Overall, it’s a bit of a mixed bag. It was nice to revisit these characters in novel form, but I don’t think if it brought anything majorly new and exciting to the table that the podcast didn’t. That being said, I…still recommend checking it out. I think it’s a fine intro to the TBS universe for newcomers, and the way I see it, any story that champions kindness and empathy is worth at least a quick browse.

7 thoughts on “Review: The Infinite Noise – Fine with a Dash of Soft & Sweet and a Landing that Doesn’t Stick”