Top Ten Tuesday was created by The Broke and the Bookish and is now being hosted by The Artsy Reader. This week’s topic is Books I Enjoyed That Are Outside of My Comfort Zone, but I’ve modified it slightly to “books that took me out of my comfort zone but I didn’t necessarily enjoy.”

Comfort zones are funny. Sometimes I feel like I know exactly what I’m comfortable with and not. Other times I don’t even know where the boundary is until I’m suddenly standing outside of it, saying, “Uh, hello? I’d like to go back inside.”

Anywho, the titles = subjects/themes/character types that were (or still are) beyond my comfort zone.

The Fifth Season was the first book with an extended second-person POV (beyond choose-your-own-adventure books) that I liked, and it actually made me see it in a new light. I love that it goes beyond a gimmick, that it actually serves a purpose in the story, narrative-wise. And I love even more that we don’t find out what that purpose is until book 3.

I was never a big space opera fan as a kid, and I only got into Star Wars and Firefly and all those other big scifi franchises as an undergrad. But then I played Mass Effect and it was like, oh hey, this spacefaring business is actually kind of cool and exciting and I think I want more.

So technically, Mass Effect is what took me out of my comfort zone. But in terms of books, it’s Karin Lowachee’s Warchild that did it. I talk about it quite a bit on the blog, and I cannot overstate just how brilliant the series is. Beyond the space opera aspect, it talks about war and identity, and it features the most disquieting exploration of abuse and its lasting effects that I’ve ever read.

Coincidentally, it also makes use of second-person POV (albeit a lot more sparingly than  Broken Earth and also in a different way), and the effect is very, very powerful.

Ironically, by pushing me out of my comfort zone, Beauty helped me find it.

Small Pawns in a Wide World

I have a hard time dealing with stories that reek of helplessness. Where the characters are given the smallest margin of agency, and everything beyond that is too vast, too complex, too deeply seeded for them to change. That’s the main reason why I dislike Never Let Me Go (I struggle with enough feelings of smallness on my own, thank you), yet it’s also the reason why I can’t get it out of my head.

A Heartpuncher of an Ending

Adam, what crime did I commit in a previous life for you to make me go through the ending of More Happy than Not? I’m 100% comfortable reading books that talk about depression and suicide as long as they give me a few rays of hope at the end. This…wasn’t that.

But now, with the initial shock of emotions faded, I can say that it’s a fantastic and crucial piece of fiction–one that talks about queerness and mental health with stark honesty–and I’m glad to have experienced it.

A Heartpuncher of an Ending 2 (Feat. Irish Stream of Consciousness)

Here’s the thing: heartwrenching endings aren’t within my comfort zone and I don’t think they will ever be. I don’t think I can ever be comfortable with something that shreds me from the inside out and leaves me tattered on the ground. That is the definition of uncomfortable.

But here’s another thing: I can be uncomfortable with something and still love it and crave it.

The final thing: I love being broken by someone’s art.

At Swim, Two Boys left me insensate with tears by the end. I was hobbling around for days with my eyes puffy and glazed over. And I would gladly experience it hundred times more. Because this book is one of the most profoundly human things I’ve ever read, and that ending, and my reaction to it, is proof of just how deeply I connected with the characters.

Queer Pain (aka Why Do I Do This to Myself) 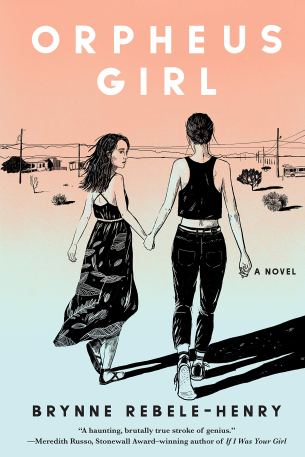 I sorely underestimated how uncompromising and triggering Orpheus Girl would be and I paid the price for it. Which sounds kind of dramatic, but god, reading this was like trying to swallow nails: painful, and not in the way I described above.

I didn’t dislike the book and I’m glad that it exists, as it talks about atrocities that are still very present for queer teens today (in the form of gay conversion camps), but it’s also something I almost wish I could unread, and I stand by what I said in my GR review: you don’t have to read these heavy topical books if you don’t want to. You’re not obligated to hold pain–any pain, queer or otherwise–by the blade and bleed yourself to prove that you’re aware of its existence.

You’re Not the Character I Thought You Were

You know what I love? Awful and seemingly irredeemable characters who, against all odds, win me over by the end of the story.

You know what I don’t love? The opposite of that. When there’s a character that I like and want to wrap in a blanket because “oh, he seems so troubled and sweet and he just needs someone to hold him.” And then it turns out he’s actually none of that. He’s actually an asshole with psychopathic tendencies and deserves a fireball to the face more than a hug. That’s a “I WAS ROOTING FOR YOU” moment and not something I’m terribly fond of.

So I should have hated The Court of Broken Knives (and its sequel, which I’m currently reading). The fact that I don’t–the fact that I love it, and it’s become one of my favourite fantasy series–is a testament to how good Anna Smith Spark is.

40 thoughts on “Top Ten Tuesday: Books that Took Me Out of My Comfort Zone (And Helped Me Find New Ones)”