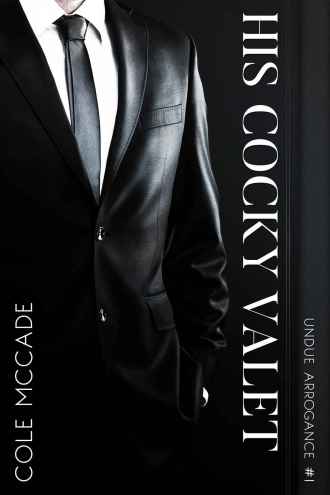 Ash Harrington’s life is out of control.

At twenty-three years old, he’s suddenly the head of a multibillion dollar global corporation he is in no way equipped to run. His father is dying. His mother’s run away. He’s spent his entire adult life playing fast and loose with his life and his loves, but when he’s dragged into a position of responsibility with the fate of the company on his shoulders, he goes spinning into freefall.

And Brand Forsythe is the only man to catch him.

Icy, detached, nearly twice Ash’s age, the massive monolith of a British valet is impossible to deal with and like no servant Ash has ever met. Domineering and controlling, Brand quickly puts Ash’s life in order.

And quickly takes Ash in hand.

Even if by day Ash has to project authority, leadership, and calm…by night he’s discovering the breathless pleasure of giving up control. The shivering thrill of surrendering to Brand. The sweet taboo of being submissive to the man in even the smallest things. Ash can’t quite understand why it feels so good to put himself in Brand Forsythe’s capable, commanding hands.

He only knows, as he faces the hardest decisions of his life…the only thing that can save him is the love of his cocky valet.

This is the first book in a while that’s made me properly angry. And of course it’s a romance book.

With Ash, you have a character who’s kind of in a vulnerable state of mind–someone who’s been hit with tragic family news and thrust into a position of leadership he’s in no way ready for. Then you introduce D/s into the mix, which is like stacking vulnerability on top of vulnerability, especially because he’s new to it and aren’t really sure what he wants (only that he wants something). And there’s nothing wrong with that. Power play can be a source of a great deal of emotional support as long as there’s clear and constant communication throughout it all.

Well, in enters Brand. He’s a valet who hails from a family of valets, comes highly recommended by his previous employer, and he’s described as being meticulous and attentive and caring in all aspects of life. So surely he’d make a half-decent dom, right?

What should have happened is Brand, who’s older and more experienced and should fucking know better, explaining everything to Ash with zero ambiguity and easing him in. Which takes time and effort and exploration. NONE of which is exhibited here. Oh no no, the careful valet disappears and he turns into some vague and moody love interest who says one thing while meaning something else. There’s so little communication with regards to their relationship (not beyond the handful of pages where Brand talks about his wants and how this isn’t really a “Dom thing” because chains and collars aren’t involved, which is blatant misinformation). Like, at no point do they discuss whether or not Ash enjoys pain, and to what degree and in what context. Brand just assumes that he does and hurts him, and as it turns out, Ash does like pain and wow, Brand is a mind reader.

The most frustrating part of this is that I actually like McCade’s writing. His previous books have a lot going for them–from careful character development to engaging, lyrical prose–and I feel like if he’d just given himself more time with this one, a lot of the issues could have been avoided.

I had one job: get K-Pop group, H3RO, a number one single. Then I had to open my mouth and promise two. It’s only because of a technicality that the Vice Chairman of Atlantis Entertainment, (AKA my demon-spawn-half-brother, Sejin), didn’t terminate their contracts.

Now, more than ever, H3RO need to keep their focus. Tae, Dante, Minhyuk, Nate, Kyun and Jun are idols, working hard to maintain their rising fame. Caught in the public eye with fan meetings, promotions and performances, somehow, no one has noticed their attention is on me.

Even if I wasn’t their manager, I know I need to back away. A dating scandal will end their careers quicker than Sejin. The guilt is eating me up, but I can’t stay away.

And neither can they.

Idol Thoughts, on the other hand, doesn’t even have the excuse of a self-imposed two week deadline. It’s just bad, period. Badly writing, bad romance, bad execution of an interesting concept.

The only thing going for it is that it’s probably the only reverse harem K-Pop romance written by a Korean author that exists in the western world. That and the fact that Lee put her glossary at the start of the book–something I found sexier than any of the sex scenes in the story. So if those are itches you need scratched, then voila, Idol Thoughts has you covered.