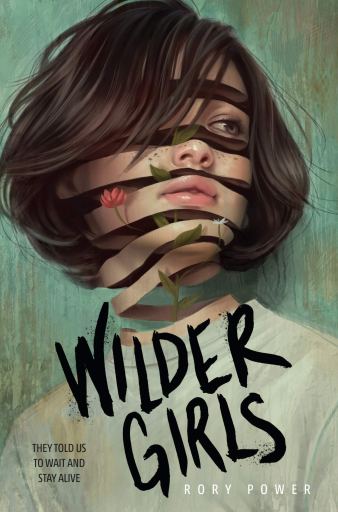 It’s been eighteen months since the Raxter School for Girls was put under quarantine. Since the Tox hit and pulled Hetty’s life out from under her.

It started slow. First the teachers died one by one. Then it began to infect the students, turning their bodies strange and foreign. Now, cut off from the rest of the world and left to fend for themselves on their island home, the girls don’t dare wander outside the school’s fence, where the Tox has made the woods wild and dangerous. They wait for the cure they were promised as the Tox seeps into everything.

But when Byatt goes missing, Hetty will do anything to find her, even if it means breaking quarantine and braving the horrors that lie beyond the fence. And when she does, Hetty learns that there’s more to their story, to their life at Raxter, than she could have ever thought true.

This is another one of those books that make me wish I didn’t have a rating system. Ones that send me into reviewer crisis mode because they’re impossible to pin down with a number.

Just keep this in mind when you get to my rant at the end: I do recommend the book. I love what it represents–girls loving girls, girls willing to fight for girls–and I love that it tries to do something different. And when it comes to art (or anything, really), shoot for the stars, even if the landing is a bit of a disaster.

Prose and atmosphere-wise, I loved it. The setting is vividly drawn, and the descriptions of the Tox and the way changes the girls, and the feelings and emotions orbiting that change, are done brilliantly. Terrible and grisly, for sure, but also infused with an uncomfortable kind of beauty.

The main characters are a bit of a hit and miss. Power describes the girls’ relationships beautifully, and I really appreciate that she took the time to explore intense friendships and romantic love and the idea that there’s room for both in your life. I also love the fact that all of these characters are allowed to be selfish and mean–not because they’re terrible people but because their circumstances aren’t kind and there’s only so much kindness you can dredge up when it feels like your life is teetering on a knife’s edge. Forever give me all the flawed female characters who aren’t always nice.

The thing is, while I was invested in the feelings that the three girls have for each other, I wasn’t invested in them as characters. I think there are two main reasons for that. One being that they’re all more or less defined by their love, and not by any strong individual characteristics that I can hook onto. And the second being that their character development doesn’t happen gradually and smoothly, but in staccato bursts. For example, one of them would say something that would trigger a sudden shift in their opinion of the other person. (spoiler): Or when Hetty goes from freaking out about killing someone in self-defense to murdering someone else in cold blood, and the latter doesn’t seem to affect her in the slightest. It can be quite jarring.

The plot and prose were engaging enough for me to shove those negatives to the side, though. And I say that as a big proponent of “characters over worldbuildng/plot.” Like, if tomorrow you tie me to a chair and tell me that the only books I can read for the rest of my life are the ones with high plot concepts but weak character building, I wouldn’t be unhappy with something like this–unsettling and horrific and strangely beautiful for it.

…And I really wish I can end this review here. I really do.

But I got to talk about that ending.

This is where things go off the rails for me. And I’m trying to purge it from my brain because just thinking about it ruins the experience I had with the rest of the book. From Hetty’s actions and how it wraps things up with the other characters, to the very sudden, very shoddy explanation for the Tox, the ending is the equivalent of strolling along a creek, tripping on a rock, twisting my ankle, and landing face-first into water that’s filled with piranhas–painfully unexpected, makes zero sense (because piranhas in Canada, what?) and puts an abrupt end to what was turning out to be a nice afternoon walk. It tried to go with a scientific route, in which case the explanation should have been doled out in small pieces over the course of the story instead of just dumping it onto your lap at the end. It’s almost as if the author wasn’t sure how to close things off, so she just went with an explanation that’s popular and topical (spoiler: climate change), and it feels so incredibly tacked-on. I’d rather have had no explanation than the ones we got. As for the ending it gives to the characters, it’s one with zero emotional payoff.

The story would have benefited so much from at least 50 more pages of content and I’m truly baffled as to why this is the endpoint the author decided on.

My initial point still stands, though. I do think this is a book worth your interest and perusal. Just…know that it may not wrap up in a way that you were hoping for.

31 thoughts on “Review: Wilder Girls – A Strangely Beautiful and Flawed Gem (Minus that Ending)”