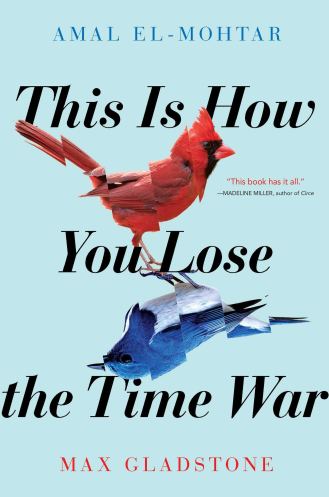 Among the ashes of a dying world, an agent of the Commandant finds a letter. It reads: Burn before reading.

Thus begins an unlikely correspondence between two rival agents hellbent on securing the best possible future for their warring factions. Now, what began as a taunt, a battlefield boast, grows into something more. Something epic. Something romantic. Something that could change the past and the future.

Except the discovery of their bond would mean death for each of them. There’s still a war going on, after all. And someone has to win that war. That’s how war works. Right?

After years of searching, this is the time travel book I’ve been waiting for.

This is How You Lose the Time War is a stunning achievement of prose and storytelling. It’s a love story dressed as a chess game played out on the shoulders of poetry. It’s got moments, especially near the end, that gave me full-body shivers and touched me to my core. It had me muttering “This makes me want to make out with someone” over and over to myself and to my roommate (who’s gotten used to my weird out-of-context comments about books). And I just can’t stop thinking about it.

Before I get into it, just a small note regarding the worldbuilding: this book doesn’t explain much to you–not about the nature of the war or its factions (though you do get some sense of the differences between Red and Blue’s homeland by the end, and let me tell you, they are fascinating)–and you either have to accept that ambiguity or have a very frustrating time with it.

Okay, so here’s the part that I absolutely love and something I think is genius: there are two different kinds of time travel that exist in this book.

The first is your typical “temporal and spatial movement from Point A to B.”

My issue with a lot of time travel books is that I don’t often get a good sense of the time period and setting that the characters travel to. And aside from the superficial descriptions, Point B doesn’t feel all that different from Point A. It’s like when you’re watching a school play and the castle scenery changes to a forest one, but some of the props are reused and you can still see all the scuff marks on the stage, so the illusion is kind of lost.

But here? Things feel very organic. You can see the texture of the places that Red and Blue visit–ancient pilgrims moving through a labyrinth, a Mongolian forest camp, Atlantis burning and sinking. Descriptions that snag on the most important aspects of a culture and time period and drag them forward. It’s economical and at the same time not, because of how purple the prose is, and just all around beautiful and atmospheric. El-Mohtar and Gladstone manage to convey a sense of time and space in the span of five pages better than some books do in a hundred, and I bow down to their collective talent.

The second type of time travel is done through letters.

This is the part that gets me jittery and giggling with joy–that in this future of advanced technology, Red and Blue are sending physical letters to each other, using anything they can get their hands on and being creative with it (paper, tea leaves, seeds, and lava, just to name a few). And they have such fun with it. I can’t even begin to tell you how romantic I find all that.

…And that was a lie. I will tell you.

I love exchanging letters. I love saving letters. I love letters, period. My closet contains boxes of all the letters and postcards and notes I saved from since I was a kid. I’ve made amazing, long-lasting connections through years of penpal exchanges. If you’re friends with me I’ll probably send you a letter at some point . And occasionally, on rainy days, I take some of those letters out and read them, re-living memories and re-reading passages I want to commit to memory because I found them particularly beautiful or vulnerable or funny. They’re like books, in that sense. Except they’re stories about you, and me, and the path that our relationship ended up taking.

“There’s a kind of time travel in letters, isn’t there?” Red writes at one point, and there’s such truth to those words. Letters are snapshots of a person at a particular time, and when you send a letter, you’re essentially carving off slices of yourself, preserving them, and gifting them to the recipient (that sounds dramatic, but hell, this whole book is dramatic). And there is romance to that act which defies explanation. This book gets that. My god, does it get it.

“I want to chase you, find you, I want to be eluded and teased and adored; I want to be defeated and victorious–I want you to cut me, sharpen me. I want to drink tea beside you in ten years or a thousand.”

I also adore the way the authors portray the characters’ love as a kind of a mutual surrender to one another: blades to each other’s throat, exchanging vulnerabilities with vulnerabilities, and feeling content in the knowledge that one can destroy the other at any moment. Not all love is that intense and all-consuming, but for two people who have dedicated their lives to being the best and always winning and holding themselves to stratospheric standards, it fits perfectly. They need this. Surrender is freedom. And that’s so fucking sexy, I can’t even.

It’ll make you believe in love all over again.

Review copy provided by the publisher in exchange for an honest review.