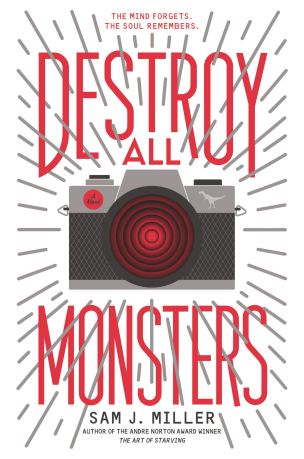 Solomon and Ash both experienced a traumatic event when they were twelve.

Ash lost all memory of that event when she fell from Solomon’s treehouse. Since then, Solomon has retreated further and further into a world he seems to have created in his own mind. One that insulates him from reality, but crawls with foes and monsters . . . in both animal and human form.

As Solomon slips further into the place he calls Darkside, Ash realizes her only chance to free her best friend from his pain is to recall exactly what happened that day in his backyard and face the truth—together.

So. I really, really like Sam Miller. The first reason being that he’s one of those writers who takes outlandish ideas and doesn’t hesitate–just dives headfirst into them. I mean, his novels so far include a cyberpunk rebellion story starring a woman who’s an orcamancer, a villain origin story about a boy whose eating disorder gives him superpowers, and now a dual perspective story about a girl with magical camera powers and her best friend who lives in his imaginary world filled with monsters and dinosaurs. Even though they don’t always work (ahem, foreshadowing), they’re still memorable and push the boundaries of what speculative fiction can achieve. And I’ll always love creators who take chances.

The second reason is that there’s always a heavy thread of compassion running through his stories. You can tell he’s writing them because he truly cares about people–the marginalized, the lost, the broken–and wants to shine a spotlight on their struggles.

Or maybe reading The Art of Starving flipped a switch in my brain and now every book of his I read feels like a heart-to-heart conversation. Either way, genuine goodness and imagination makes for a lethal combination.

Well, Destroy all Monsters has both of those, which is fantastic, but for me it severely falters in the storytelling department, ultimately making this a disappointment.

The main culprit behind the issues? Alternating PoVs.

We switch back and forth between Ash’s chapter, which shows the MCs’ lives as normal highschool students, with Solomon dealing with severe trauma, and Solomon’s chapter, which takes place in an alternate fantasy world where Ash is a princess-in-hiding. The problem is that the blurb and the early part of the story has you thinking that Solomon’s chapters are all occurring in his head. So I spent half of the book trying to figure out where the two PoVs line up, because surely some aspects of Ash’s PoV should be seeping into Solomon’s.

But they don’t line up–at least, not until the end, and even then the connection is tenuous.

The characters in Solomon’s PoV are the same people as the ones in Ash’s PoV, but their personalities, actions, and motivations differ (well, only slightly with the personalities). So basically you’re getting two different plots–starring two sets of characters–crammed into one 400-page book, and neither of them is developed enough to be engaging.

Also, friendship is a huge theme in the story but because of the alternating format, we don’t spend enough time with either sets of Ash and Solomon to get a good feel of what their relationship is like.

But the reveal at the end regarding Solomon’s world has to be the biggest letdown because it turns the narrative from a “Exploration of Mental Health via Fantasy” story to a “I’m Suffering from an Identity Crisis” story. It strips away the emotional impact that the previous chapters were building up to and I found the result messy and unsatisfying.

Review copy provided by the publisher via Edelweiss in exchange for an honest review.

10 thoughts on “Review: Destroy all Monsters – Messy with a Chance of Dinosaurs”