Solomon and Ash both experienced a traumatic event when they were twelve.

Ash lost all memory of that event when she fell from Solomon’s treehouse. Since then, Solomon has retreated further and further into a world he seems to have created in his own mind. One that insulates him from reality, but crawls with foes and monsters . . . in both animal and human form.

As Solomon slips further into the place he calls Darkside, Ash realizes her only chance to free her best friend from his pain is to recall exactly what happened that day in his backyard and face the truth—together.

Fearless and profound, Sam J. Miller’s follow up to his award-winning debut novel, The Art of Starving, spins an intimate and impactful tale that will linger with readers.

I’m super excited to be joined here today by Sam Miller, author of Blackfish City, The Art of Starving, and his most recent YA release, Destroy all Monsters.
It’s got friendships and dinosaurs and photography magic and–

You know what? I’ll just let him tell it.

Hi, Sam! Thank you so much for being here today! I haven’t read DESTROY ALL MONSTERS yet but if it’s anything like THE ART OF STARVING, I’m sure I’ll be crying in a fetal position while hugging it to my chest. To start off, can you share a bit about Solomon and Ash and some of the things they’re going through in the story?

DESTROY ALL MONSTERS is the story of Solomon, a gay teenage photographer in a city full of monsters and magic, who is trying to save his best friend Ash – the Refugee Princess – from a conspiracy trying to destroy all magic. But it’s also the story of Ash, a regular teenager in the real world, who is trying to save her best friend Solomon from a mental health crisis. As their quests progress, these two worlds begin to collide.

What was the main inspiration behind the story? I know this is a cliche, but it’s a question I never get tired of asking because the answers can be so unexpected.

I’ve always wanted to write a story that was set in two separate worlds, half gritty contemporary and half fantasy novel, because I love both those genres and the different kinds of fun you can have with each! DESTROY ALL MONSTERS was born the way lots of my stuff is born – the characters walked up to me and introduced themselves and then slapped me around until I did what they wanted me to do. In this case it was a pair of troubled teens, best friends, from different worlds, and it seemed like the perfect opportunity to finally a story set in two very different genres – and have those worlds collide in wild and crazy ways.

I love, LOVE how you combine SFF elements with the topic of mental health in your books–your first YA story was about an eating disorder that manifests as fantastical powers, and now your second one revolves around trauma and monsters. What draws you to write these kinds of stories?

Well, being queer was considered a mental illness until the 1960s! And being queer is totally a superpower. So I’m definitely drawn to aspects of our experience that we are trained to perceive as negative or bad, or illnesses is to be cured, they’re really just different aspects of our self. Life is full of wonder and magic, and the things that we may be infuriated or depressed or miserable about are also things we can make peace with and find power in.

This is your third published novel (which is incredible!!) and I’m sure you’ve gotten hundreds of feedback from readers (including myself), but what are some of the favourite things you’ve heard over the years, from both teens and adults?

I’ve gotten a ton of great responses from people, especially young folks, who have let me know that my work is help them process painful or traumatic or confusing aspects of their own experience, and that of course is always my highest goal as an artist. Life is hard, and full of suffering we don’t want and don’t deserve, and great art is here to help us make peace with the world as it is. So just like great books and movies and music have helped me stay alive, I am always gratified to hear that my own work has had similar impact on others.

Pride month will be over when this interview goes up, but since there’s never a bad month for queer books, what are some recent LGBTQ+ reads that you want to recommend?

I can’t wait for the next book by Mark Oshiro! And ABSOLUTELY EVERYTHING BY KACEN CALLENDER. And I’m super excited for How to Be Remy Cameron by Julian Winters, The Gravity of Us by Phil Stamper, and Mason Deaver’s I Wish You All The Best, and We Set the Dark on Fire by Tehlor Kay Mejia 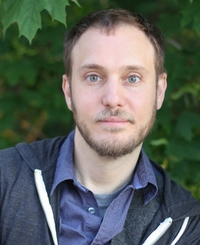 Sam J. Miller is the Nebula-Award-winning author of The Art of Starving (HarperTeen), one of NPR’s Best Books of 2017. His second novel, Blackfish City (Ecco Press/USA; Orbit/UK) was a “Must Read” according to Entertainment Weekly and O: The Oprah Magazine, and one of the best books of 2018 according to the Washington Post, Publishers Weekly, and more. Joan Rivers once asked him if he was gay (HE IS!). He got married in a guerrilla wedding in the shadow of a tyrannosaurus skeleton. He lives in New York City.

13 thoughts on “Interview with Sam J. Miller – Destroy all Monsters”