Oh boy oh boy. It feels like I haven’t done one of these in forever.

So, this week’s prompt was “2019 releases that I don’t care about.” But apathy is something that I actively try to fight off on a regular basis (thanks, depression), so dedicating an entire post to talking about things I don’t care about felt…I don’t know, counter-productive.

So I’m doing what I do best, which is complicating simple things, and changing it to “2019 releases that I didn’t care about but am now tentatively anticipating.” Now it starts off negative but ends on a sort-of positive note. 😀

The Priory of the Orange Tree by Samantha Shannon 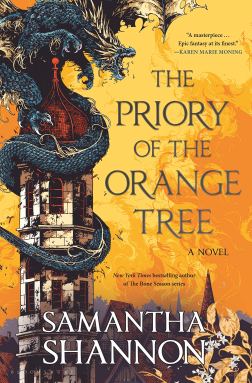 This one has been hyped to hell and back and for good reason. It’s thick, it’s got dragons and intrigue and possibly-interesting female characters, all wrapped up in a stupidly good-looking cover.

All of which made me shrug and think, “Yeah, this is too good to be true.”

But. It’s a door-stopper epic fantasy written by a female author with feminist themes, and I could stand outside my local mall all day holding up a sign that says “WE NEED MORE OF THOSE.” Plus I feel like it’d be a crime not to try out any book with that as a cover.

The Wicked King by Holly Black

Okay, to be fair, this one had the “I don’t care” stamp before I’d read The Cruel Prince. And now that I have read it, while I’m not bouncing-off-the-walls excited (my anticipation levels for this book are about as lukewarm and kind-of-there-kind-of-not as Cardan), I am mildy curious to see how things pan out for Cardan and Jude.

I adore the original Robin Hood legend. My love hasn’t really been reciprocated in the past decade or so, however (not until recently with a certain series which I will most definitely ramble about in a separate post). Every adaptation that comes along swearing that it’s giving RH a fresh and interesting look is 1) neither of those things, or 2) something so weird and outlandish that it shouldn’t even have the “Robin Hood” title (looking at you, 2018 film).

While Sherwood isn’t the “gender-bent Robin Hood falls in love with Maid Marian” story that I was hoping for–it’s got Maid Marian taking the Robin Hood mantle while Robin’s off doing God knows what–I’m willing to give it a try.

While I do love Sam Sykes as a person, I just couldn’t get into his Bring Down the Heaven series. There’s something about his writing that didn’t click with me. So Seven Blades in Black initially went in the “maybe I’ll try it one day” pile.

I don’t remember why I moved it to the “anticipated” stack (probably because I caved into Sam’s Twitter charms), but it’s there now and hopefully I’ll take to it better than his previous books.

The Familiars by Stacey Halls

I turned my nose at this one because the cover made me think it was a fable-y, magical realism story featuring witches and their familiars, but then I found out it’s actually about a woman dealing with pregnancy in the 17th century (with a witch hunt backdrop), which was decidedly less interesting to me.

But I do enjoy historical feminist stories, and there’s something super magnetic about that cover, so I’ll give it a shot!

Are there any 2019 books that you’ve had a change of heart about?