It’s the middle of the month…and you know what that means! 😀

So, I was going to include mini reviews for some of the games I played in the past month because Nicole @ Thoughts Stained With Ink was like, “Heck yeah! You should totally do that!” But the post was getting kinda long and there’s this one game that I absolutely need to GUSH about, so I’m shuffling those to separate posts.

And that means I’ve finally decided to do semi-regular posts about video games (with a heavy focus on indies because while I love AAA titles, it’s the indies that make my heart sing). Will anyone read them? Who knows!

As for books, October was an okay month. I read 9 in total, most of which I enjoyed:

The Light Between Worlds by Laura E. Weymouth ⚔️🗝️:
If I were a cat, this book would have killed me nine times over. Thank you for breaking me in the best way, Laura.  [Review]

A Conspiracy of Truths by Alexandra Rowland ⚔️🌈:
This was such a clever and entertaining story about, well, stories and their power to change the fabric of the world. And its protagonist is an elderly man in his 70’s which you don’t see everyday in fantasy. [Review]

Alice Isn’t Dead by Joseph Fink 👁️🌈:
I really liked it. I think it works perfectly as a companion to the podcast. But I don’t know if it’s something that can hold up on its own? I’ll talk more about it in the actual review.

Sadie by Courtney Summers 🔍🌺:
Yet another review I have to finish writing! “Enjoyable” is probably the wrong word to describe the story, but it is a compelling one and I can’t say enough good things about the audiobook. Massive kudos to all the voice actors.

Mort by Terry Pratchett ⚔️:
Read this as part of our Discworld Readathon! I’ve heard people talk about it like it’s the second coming of Christ, and to my surprise, it was actually really good. [Review]

The Better to Kiss You With by Michelle Osgood 👻🌈:
Gerry (Book Nook UK) remarked about the prevalence of male werewolves in stories, and this is one of the few books I’ve read with a female werewolf love interest! Overall, a fun, sexy F/F story about werewolves, MMORPGs, and harassment culture. Plus, the author’s a local!

Time’s Children by D.B. Jackson ⚔️🚀: A mashup of time travel and epic fantasy! I guess “pleasant” would be the best wor? Nothing amazing but I did enjoy it for the most part. [Review] 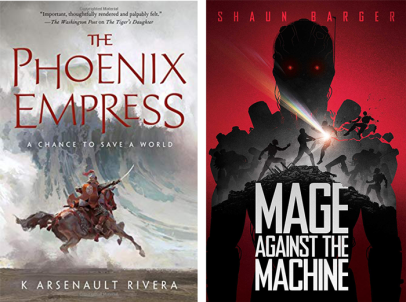 The Phoenix Empress (Their Bright Ascendancy 2) by K. Arsenault Rivera ⚔️🌈:
Yeah, this was not a good one. The cultural issues aside, I found the pacing to be glacial, the character development lacking, and worldbuilding more or less nonexistent. [Review]

Mage Against the Machine by Shaun Barger ⚔️🚀🌈: I noped out of this one halfway through and my tablet is so, so grateful. [Review]

So in this second half of the wrap-up I’m going to ramble about art and my decision to return to it after so long.

And it begins with a little story, so gather around!

Once upon a time there was a little girl who had a bit of an eclectic family. In terms of profession, anyway. On one half there was a seafood restaurant owner, a spicy chicken restaurant owner, movie producer, teacher, pastor, dentist, investment banker….and the other half were just artists and writers.

The girl loved photography, writing, and drawing, and it was this last one that she felt the most insecure about. Insecurity turned to shame and shame turned to cold dejection and she decided one day that she would quit–because she wasn’t any good, so what was the point? (And when the girl looks back on it years later, she’ll recognize that it was partly an act of self harm–this denying herself of something she so loved)

But then 8 years later, thanks to a book, the girl’s returned to the world of drawing (because books are amazing and can literally change lives), and she’s been loving it–absolutely loving it. But on the heels of that love came doubt and heartache.

So it’s been four months since my “return” and I’ve been spiraling into that oh-so familiar mindset of “I’m fucking terrible at this,” with my brain constantly yapping in the background, “Hey, remember how you quit all those years ago? Yeah, this is why.”

It’s hard to look at a finished work and not see a road map of all my flaws. Not just flaws of the drawing–though they’re obviously the first ones I see–but all of my flaws. Like, as a person. Because that’s how my brain operates.

And it is exhausting.

Turns out comeback stories are more fun to read/watch/play than to actually experience.

But one thing’s for sure: I’m not quitting again. Because once was enough for me to realize that it’s a shitty, shitty place to be in–no wi-fi, no heating, 1/5 on Yelp.

It was like locking yourself out of your house, throwing the key down a drain, and then just standing there, peering through the window (and there’s a part of you that knows this is your home, it’s always been your home, it could have always been your home, and just what the hell have you done?) And this terrible, aching longing settles inside you, and the more you peer, the more it floods you until you’re no longer a person but just a vessel of regrets and self-inflicted hurt.

I run through my life via two extremes–exaggerated indecisiveness or blind impulsiveness–and I never really know which one I’ll pick in a given situation. With this, though, my brain chose the latter. So deciding to return to art after nearly 10 years of avoidance was like punching through the window (because that key’s lounging at the bottom of the Pacific by now), climbing in and declaring, “Okay, you and me? We have unfinished business.” And the sheer relief I feel in that moment? Indescribable.

But then I realize my hand is all bloody and crusted with glass and I end up hopping around muttering expletives which really just ruins the bravado of it all. (That’s generally how my life goes. I want to think of myself as a protagonist in a Chris Nolan epic, but in reality I’m probably more like the sidekick in an Adam Sandler film–awkward, sad, and the antithesis of good comedy).

I could rant for days and days about how unfair it is that your passion can be this nourishing, too-bright thing that fills up your entire world until it’s not.

Until your fears and insecurities take the reins and turns it into an ugly, shameful blot that you can’t bear looking at so you shove it into the deepest corner of your mind-closet, buried under every rejection and hurt you’ve been collecting since childhood.

Except, as it turns out, not looking at it is equally painful, just in a different flavour.

So that’s where I’m at right now. Fighting myself (which isn’t anything new), a lot of late-night crying (also nothing new) and saying “I’m not letting you take this away from me again,” and my brain–always eager to get in the last word–whispering with smugness and false concern, “I’m only trying to help you.”

On good days I can laugh and give it the finger because, hell, the floodgates are open and I can finally create everything that’s been crowding my brain for years and I’m having fun. On bad days–and those often eclipse the good–I sit down and listen like it’s a sermon worth giving a damn about.

And I just wish it were easy to find a healthy, balanced relationship with our creative endeavours. To be able to hold forgiveness in one hand and critique in the other and navigate the tightrope that life demands that we walk, and achieve a state of…well, not satisfaction–because no creator is ever completely satisfied with their work–but a comfortable awareness.

And this is all just a really dramatic explanation for why my reading/blogging pace has dropped, why I’ve not been blog-hopping as much, why it’s taking me forever to respond to your comments, etc, etc. Because I’m dedicating these last three months to aggressive, aggressive drawing–to try to meet my pains head-on instead of shying away as I’ve done in the past.

Because it’s you or me, brain.

And I plan on winning.

On that note, I hope all your Octobers went super well! Happy reading!