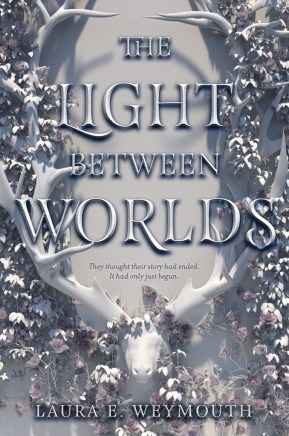 Six years ago, sisters Evelyn and Philippa Hapwell were swept away to a strange and beautiful kingdom called the Woodlands, where they lived for years. But ever since they returned to their lives in post-WWII England, they have struggled to adjust.

Ev desperately wants to return to the Woodlands, and Philippa just wants to move on. When Ev goes missing, Philippa must confront the depth of her sister’s despair and the painful truths they’ve been running from. As the weeks unfold, Philippa wonders if Ev truly did find a way home, or if the weight of their worlds pulled her under.

Right. Where do I even start with this?

How about here: there’s only one other book (or series, rather) I’ve read this year that’s made me cry as much as this one, and even now, days later, it’s got me aching and drenched with its characters and their pains.

I wondered if should take a month to sort out my feelings and write something that can be at least 10% of what this story is worth. Then I realized I could take the entire year and still have no “perfect” review to show at the end of it.

Well, I know I can’t do it justice. But I’ll try anyway.

The Light Between Worlds is a portal fantasy unlike any I’ve ever read. A re-imagining of Narnia and the continuation of it. The continuation of all portal fantasies, as it explores what happens to these children, who are no longer children, when they get dropped back into a world they’ve been absent from for so long. It’s a bit like the Wayward Children series and The Girl Who Circumnavigated Fairyland in that respect.

But Light Between Worlds takes things deeper. Darker. It approaches portal fantasy with a brutal lens that refuses to sugarcoat the reality of war, depression, PTSD, and the kind, wise mythical creatures who would take oaths of service from the mouths of children. But most of all, it’s about the love between sisters and finding a place–a world–that you can rightly call “home.”

One of the most brilliant things about this book is that it show how portal fantasies are, in many ways, tragedies. And it does that by being very light-handed with the fantasy. We only see limited bits of the Woodlands from Evelyn’s flashbacks, and I don’t think additional details are necessary (though it would have been welcome) seeing as how it’s a world we’ve all seen before–if not in Chronicles of Narnia, then in some other fantasy tale. The real focus of the story is in present-day England, where we see all the ways that the Woodlands haunts these characters.

It’s been five years since the siblings came back from the other world and Evelyn hungers deeply for it. Every part of her bleeds Woodlands and she walks through each day like a ghost, keening for a home that’s lost to her.

You don’t need to be a character in a portal fantasy to relate to Evelyn’s struggles. If you’ve ever longed for a time you wished you could return to; if you’ve ever longed to be somewhere else–or if not somewhere else, then to at least find some kind of footing in the present because most days it feels like you’re drifting above it; if you’ve seen your loved ones break themselves to keep you here, keep you whole; if it ever felt like you’re watching your life through the mirror of a mirror, all distorted and foreign–and the suffocating loneliness that comes with it, and the sense of unbelonging, and the feeling that one day you’re just going to float up and up away into nothing–and all that is enough to make you want to stop being…you will see yourself in Evelyn.

I saw far, far too much of myself and when I wasn’t tearing up or outrightly sobbing, I was turning pages with my heart lodged in my throat. And still I couldn’t stop reading. Because while Weymouth doesn’t shy away from the ugliness of mental illness, her portrayal is so honest and in its honesty there’s validation.

And the prose, at once simple and beautifully melancholic, compliments the subject matter so well and helps blunt the harshness. There’s a thrum of sorrow that runs through the writing, but above it you can also find wonder and love–so much love–and the combination is breathtaking.

And then we have Phillippa who’s waging a different war of her own but finds herself just as lost as Evelyn. While I saw most of myself in Evelyn, it was the elder Hapwell sister who captured my heart.

Phillippa is the pillar of the family. The one who tries to remain steadfast and strong even when she’s crumbling inside. The one who has to hold Evelyn back from her darkness time and time again. And unlike Evelyn she’s determined to carve a new life in this world and forget the magic of the woods and its great Guardian stag. Determined to wear a confident smile because she refuses to become what Evelyn’s become, she cannot. I don’t want to make a lot of Narnia comparisons, but with Phillippa the book does right by Susan Pevensie, taking Lewis’ “lipsticks, nylons and invitations” line and turning it from a condemnation into a shield and a weapon. It’s brilliantly done.

The love shared between Evelyn and Phillippa is undeniable. But love can exist with razor-sharp edges; it can hurt as much as it nourishes. And sometimes love isn’t enough to keep you from breaking when things get hard, and things can get so, so damn hard. The sacrifices these two make for each another despite the hurt and the hardship is the very definition of courage and what makes this story such a masterful one.

All in all, The Light Between Worlds is a stunningly beautiful character-focused story about finding light amidst the grey. And I know, down to my bones, that it’s one I’ll treasure for a long, long time.

Note: the author has a paragraph of trigger warnings for the book on her website–including self-harm and suicide ideation–which I didn’t take seriously. Turns out I should have. And you should too. They’re there for a reason. I had to binge-watch The Haunting of Hill House to recover from it, because being too scared to go to the bathroom is better than being too sad to get out of bed. Take care. ❤