So I decided to get a little more specific and feature some monsters that are native to Korea and Canada (because–*waves*–Korean-Canadian here). And by “Canada” I mean its various First Nations tribes. 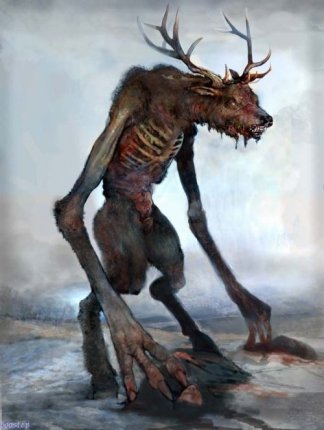 Rooted in Algonquian mythology, Wendigos (or Windigos) are said to roam the forests of Canada and parts of northern U.S. either as a spirit or a physical monster (accounts seem to vary). Physically, it’s been described a rotting, emancipated werewolf-esque creature with preternatural speed and senses. Reeking of death and decay, the Wendigo is built to stalk and hunt humans. Its hunger is insatiable and no matter how much it feeds it remains in a state of perpetual starvation.

As a spirit, it can possess people and render them to a state of mindless hunger. Greedy people and people who have practiced cannibalism seem to be its most susceptible victims.

➽ The Curse of the Wendigo (Monstrumologist 2) by Rick Yancey

This book remains my favourite Wendigo story to date. With trademark lyricism, Yancey captures the visceral horror of Wendigos and the isolation of the Canadian wilderness so well.

Inmyeonjo (인면조) is, simply put, a long-necked bird with the face of a human. And I absolutely hated the thing when I was a kid. The paleness of it combined with the period headdress made for some jarring nightmare fuel. But despite the sheer weirdness of its appearance, it’s a relatively benign creature, one whose existence is meant to bridge the sky with the land. After all, the South Korean Olympic committee included it in the PyeongChang opening ceremony as a symbol of peace and harmony. 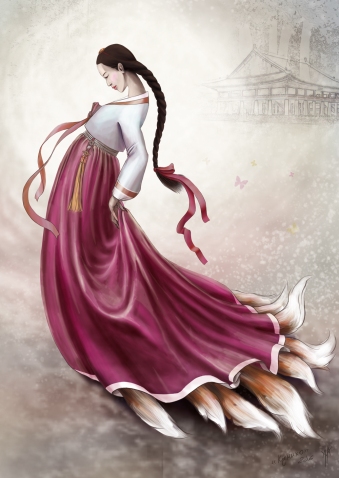 All you K-drama fans will be familiar with the kumiho/gumiho from the 2010 series My Girlfriend is a Nine-Tailed Fox. Kumiho, which translates literally to “nine-tailed fox,” is an ancient fox spirit that can shapeshift into human form–most often a beautiful, seductive young woman. Much of East Asian folklore (and culture as a whole) is tightly intertwined, with big sibling China being the main influencer, so kumiho has its counterparts in kitsune (Japan) and huli jing (China).

The most notable difference is that kumihos carry a marble (size of a candy) containing the entirety of the foxes’ strength and knowledge. And a human can gain all that knowledge by swallowing the marble whole.

The other distinction is that while kitsune and hli jing are portrayed as mostly chaotic-neutral spirits–with tricks being the extent of their malevolence–kumihos are said to have a taste for human flesh. Male human flesh, in particular. With hearts and livers being their preferred delicacy. In some tales, the kumiho is able to shed its monstrous form and become fully human if it can resist the lure of flesh for 1000 days. This last bit I find fascinating because it really underscores the influence of Buddhism–the idea that our goal in life is to reach a higher state of being.

A gorgeous comic set in 1968 Seoul. There are only 4 chapters out right now and it’s currently on hiatus, but it’s so worth taking a look.

I need to set an altar to Yoon Ha because he’s writing all the Korean speculative fic I need in my life. There’s currently a surge of mainstream Asian SFF (especially in YA), but Korean speculative stories remain curiously absent. At this point I’m tempted to just write one myself. 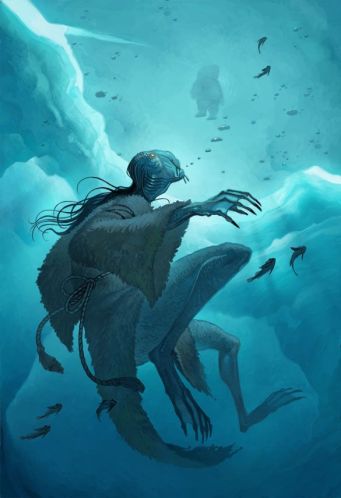 Originating from Inuit lore, Qalupalik is described as a humanoid sea creature that steals away disobedient children who stray a little to the water’s edge.

The interesting thing is that she doesn’t eat the children she captures but hides them away in her secret lair. Which seems…oddly anticlimactic and begs the question of what the heck happens to the kids afterward (do they drown and get arranged in the qaluplaik’s underwater cave like dolls?) but hey, it’s a story meant to keep children from misbehaving, not the The Silmarillion.

➽ A Promise is a Promise by Robert Munsch:

Munsch is a national treasure and I’m pretty sure this book is where I first heard of the Qalupalik. 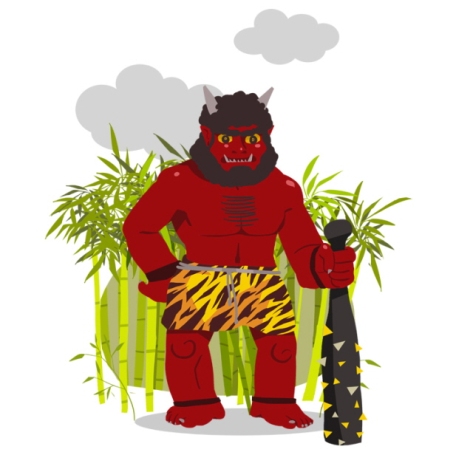 These guys are present in pretty much every Korean folktale. Dokkaebi are powerful horned goblins who carry around spiked clubs and other such magical objects. Unlike the ambivalence of Inmyeonjo and the violence of kumiho, dokkaebi are mostly just…goofy (in their action, at least. Their traditional appearance is red and hulking and rather quite scary). They seem to enjoy messing with humans as much as they like helping them, and they’re known to challenge hapless travelers to wrestling matches.

I’ve yet to encounter them in western literature, but a google image search for “dokkaebi” gave me a wall of Rainbox Six Siege results, which is how I learned that they have a new playable Korean character whose nickname is “Dokkaebi.” So that’s pretty neat!

Have you ever encountered these in any media? And what are some of your favourite mythical creatures from your country?