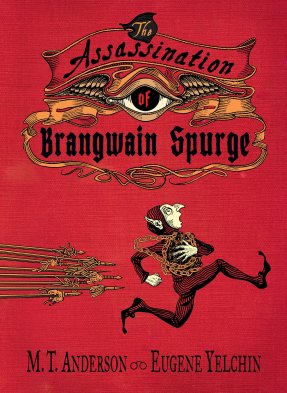 This is the first M.T Anderson book I’ve read since his Octavian Nothing series (must-read books) and it’s great to see that he’s continuing on the trend of writing subversive, challenging stories that ignore the usual conventions of YA, because The Assassination of Brangwain Spurge is a brilliant fantasy tale that tackles everything from cultural prejudice and historical biases to war and monarchical corruption, and all with a dark humour and wit that will 100% appeal to Pratchett fans.

The Elfin Kingdom and the Goblin Kingdom have been at war with each other since pretty much forever. They’d only reached a tentative truce five years ago and the elfin king has decided he would send a little gift to the goblin court as a gesture of goodwill. So historian Brangwain Spurge gets selected to deliver this token of diplomacy to the goblin ruler and report back on what he sees of the goblin city. And just so happens that Spurge’s goblin guide, Werfel, is a historian himself–what fun!

We alternate from Werfel’s POV, which is all in written form, to Braingwain’s POV, shown as a series of illustrations which are “Top Secret Transmissions” that he magically creates and sends off to the Elfin kingdom as day-to-day reports. That’s good and all except Spurge’s view is hilariously, horrifyingly different from that of Werfel. His versions of the goblins look like they should belong in a horror house– grotesque and barbaric with the occasional entrails and beheaded heads adorning the background. Glorious nightmare-fuel stuff. Werfel on the other hand shows the goblins as eclectic, but charming and mostly well-meaning. It’s unreliable narration at its most fun and Yelchin does a wonderful job bringing the horrors to life.

There’s also some really nice, subtle character development that I didn’t expect in a story as parable-y as this one. Werfel goes from an eager-to-please, overly gracious host to being utterly frustrated and done with Spurge insulting his culture and making trouble. Seeing their rather one-sided relationship develop into one of mutual appreciation and friendship is an incredibly satisfying experience.

What I most loved about the book, though? All the myriad of topics it manages to address. I love YA/children’s authors who don’t talk down to their readers and Anderson’s motto when it comes to writing seems to be, “kids are scary smart and they understand more of this world than adults give them credit for.” And with this book he tackles subjects that we don’t even see in many adult fantasy–things like post-colonialism and the construction and control of public belief via secret police.

At its core, though, the story is about history and how we interpret them. Werfel and Spurge both have different ideas on how the elf/goblin war went down. The former believes the elves were the warmongers, driving the goblins out of their homeland forests, and Spurge believes the goblins were the massacrers and the elfin government the arbiter of peace. This leads to hilarious debates and frustrations on both sides, and through these little exchanges Anderson makes a point of how countries tweak, shift, and erase history to fit the narrative they want to sell to their citizens. It’s quite wonderfully done.

The story also examines the way we view other cultures–of how easy it is for prejudice to seep into our minds. At first glance an aspect of another culture’s can be discomforting and strange. So do you cling to this shallow impression you have of them like a safety blanket, or do you try to step out of your comfort zone and get to know them better? Seek out their stories and traditions? Bridge the gap? I love stories that try to combat “otherness” and fear of otherness, and this does exactly that. And the best part is that it never gets boring or preachy.

From start to finish The Assassination of Brangwain Spurge blends wit, action, and dark humour to create a story that’s not only full of depth but also a lot of fun. It’s one I highly recommend to all readers, young and old.

20 thoughts on “Review: The Assassination of Brangwain Spurge – Chock Full of Wit, Intelligence, and Hilarity”