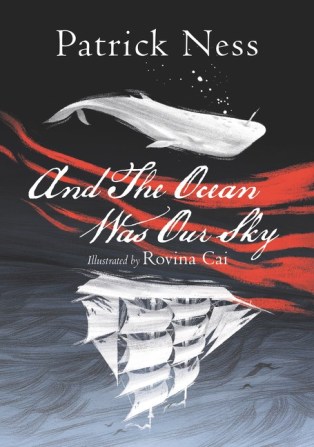 “Harpoon strapped to my back, swimming along the decks of the great hunting ship Alexandra, our sails catching the currents, the Abyss below us, the ocean our sky.”

Patrick Ness is up there as one of my favourite authors. His books are a heady mix of originality and poignancy and he’s constantly pushing boundaries in the YA speculative field. And even if his ideas don’t always work, the world is made better for having them. He doesn’t like playing safe. And I fucking love that.

And the Ocean Was Our Sky is one of Ness’ stranger creations in which he tackles an inverted retelling of Moby Dick. In someone else’s hands, the story could have easily turned belly-up. But Ness, for the most part, makes it work.

I was curious as to see if he would try to emulate Melville’s prose (to some degree, at least–this is a YA novel after all). And while he does keep the introspective style of Ishmael’s narration, it’s still very much Ness’ writing–lyrical in a quiet kind of way.

Written in first person view from a young whale known as Bathsheba, the story follows a pod of hunting whales, led by Captain Alexandra, as they follow the trail of a legendary man known as “Toby Wick” (Yes, it’s kind of silly. And yes, I laughed when I first saw it). As in our world, humans have been hunting whales for hundreds of generations. But in this world, the whales fight back. In this world, the whales are also the hunters. Humans kill whales and sell their parts for profit. And whales take human body parts and sell them to rich whales as trophies and fake remedies. It’s a perpetual cycle of conflict and animosity and there’s little sign of it stopping.

In this story, the whales live physically upside-down from what we’re familiar with–so the depths of the ocean is their “sky” and the air is their “abyss.” It’s an interesting detail and metaphor-wise, I loved it, as it presents the whale and human as reflections of one another. It’s poetic and haunting and asks who the real monsters are in this conflict. Story-wise, however, I did find it a little strange (Does gravity not work the same way in this world?)

And that more or less sums up my feeling on this book. I adored the themes and the metaphors and the way Ness presents them (and the simple pencil illustrations scattered throughout the story enhance the beauty of these messages). Plot and character-wise, I was left wanting a little more. While I enjoyed the pragmatism of young Bathsheba, the side characters are underdeveloped and I felt emotionally disconnected from them. Most disappointingly, Captain Alexandra doesn’t have the same allure as her Melville counterpart and just comes off as an aggressive bully.

In the end, you’re not going to get robust worldbuilding, intricate character development, or an in-depth explanation of this whale society. What you are going to get is a complex allegory on the power of prophecies and beliefs and the idea that we are sometimes too eager to create the monsters that we so fear.

Not my favourite Ness book, but intelligent and enjoyable nonetheless.

28 thoughts on “Review: And the Ocean Was Our Sky – Moby Dick Inverted”