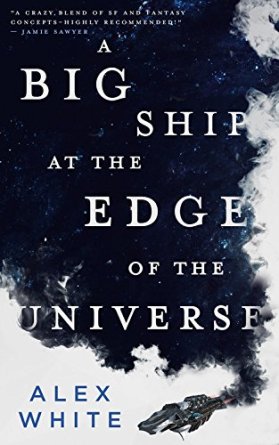 “You’re going to get killed.”
She looked across at him, stars in her eyes. “But what a grand way to die.”

A Big Ship At the Edge of the Universe had first caught my eye with its fantastic premise–a space opera featuring a treasure hunt, two women on the run, and a F/F romance. What’s not to like? And I’m pleased to say that the story lives up to my expectations. It combines high-octane action and charming characters to create a summer scifi that’s perfect for fans of Firefly and the Borderlands games.

Here’s the quick rundown: a cocky young woman crosses paths with a mouthy veteran. Both get kidnapped by the veteran’s former captain and are thrust into a hunt for a legendary ghost ship. Space battles ensue. Romances are had. Hand-to-hand combat is considered foreplay. And things get very, very dangerous.

Nilah is as privileged as they get. A bigshot racer with a rich father and utterly naive when it comes to the wider universe. Then, during one race, she bears witness to the murder of a fellow racer and she soon finds herself on the run with a hefty bounty on her head. Her life thus far has revolved solely around driving and trying to get her name inscribed in the racing history books. So this whole murdering and ship hunting business? Not a fan. At all.

In enters Elizabeth “Boots” Elsworth. An older veteran woman who now makes her paltry living as a treasure map maker and seller. Most of her maps are conjectures (i.e. junk), but every so often she happens on the real deal, which, unfortunately, turns out to be the case here.

Boots and Nilah are fantastic together. Nilah reminds me of a bratty princess (who can also throw a hell of a right hook), and Boots a world-weary gunslinger with a penchant for sass and sarcasm. We’ve seen this dynamic plenty of times with male characters in every genre of fiction, so it’s exciting to see it played out between two women. Boot’s sarcastic quips never failed to make me smile and Nilah’s reckless, daredevil spirit is nothing less than infectious. They’re both characters you can’t help but want to be best friends with.

The side characters are also varied and interesting–especially Orna, the hot-tempered quartermaster and Nilah’s love interest. Their romance will appeal to fans of the enemies-to-lovers trope; there’s enough friction between them to light up an entire city and I loved every bit of it.

What’s also impressive is the magic system. Yes, there’s magic in this story, and though it’s strange saying this about a space opera, it’s very cool. When most scifi stories try to incorporate magic into their world, they don’t call it “magic”, they give it scientific-sounding names, a la “Biotics” from Mass Effect. But we all know they’re just wizards in space. Here? No such coy winking. Alex White blatantly calls them “wizards” and “mages” and their abilities are literally just spellcasting. I love that. Magic and future tech seamlessly interact in ways that are inventive yet highly plausible, which, for fantasy and scifi lovers, is truly the best of both worlds.

What’s even more fascinating is that this is a world in which magic is the norm. The majority of people are all born with the ability, and being a non-caster is considered an incredibly rare defect. Thus “non-casters” are often treated with pity and distaste. It’s an interesting societal characteristic that I would love to see explored deeper in the sequels.

The story isn’t without a few problems. I couldn’t get a good sense of what some of these planets looked like beyond the basics, which was a little frustrating. And throughout the second half, I found myself craving a bit less action and a bit more character interaction. Nilah and Boots’ burgeoning friendship is put on hold in favour of moving the plot forward and we get less scenes of them together. Nilah and Orna’s relationship also seems to skip several steps in the middle–moving from “I’m going to bash your head in” to “I love you” a little too quickly for my liking.

All in all, though, A Big Ship is a lovable story–full of crazy action scenes, an eclectic cast of characters, and a myth to chase–and I had a ton of fun with it. Book two will be dropping later this year and I very much look forward to seeing what adventures these characters will face next.

~
ARC provided by Orbit in exchange for an honest review

15 thoughts on “Review: A Big Ship At the Edge of the Universe – An Exciting Intragalactic Adventure”