This idea for a blog post came to me while I was half asleep in bed. It sounded genius then and didn’t seem all too bad in sober daylight, either.

Then and Now is going to be an infrequent series (read: I’ll write one whenever my lazy brain feels like it), and it’s basically going to be a way for me to recount my changing tastes when it comes to fiction. We all have characters that we loved when we were 14 but can’t stand as adults. This is a way to examine the why’s of that change–is it just a matter of growing older and having more experience, or is there something more? Every aspect of what makes a story a story–from settings and character traits to plot tropes–is fair game.

And because I don’t make anything easy for myself in life, I’m going to start off with a possibly controversial topic: “Strong Female Characters.”

When I was 13 and pint-sized, I discovered Tamora Pierce’s Song of the Lioness books and Robin McKinley’s The Blue Sword, and my whole world shifted on its axis. The idea of plucky young girls wielding swords and walking around in male-dominated settings with casual confidence lit a fuse inside of me. I browsed the YA shelves from A to Z, desperately searching for books that offered similar characters. I would literally Google “YA fantasy with strong female protagonist” and devour all the recommendations.

Now, though? I grimace whenever a book touts “strong female characters” as its main selling point. It’s not that I have a problem with female characters being depicted as strong. It’s the way that the phrase is interpreted by writers and the media as a whole. The way it suggests that there’s only one way to be a strong woman–a genderbent version of a typical male hero. Physically strong or capable, talented, charming, and often snarky. And ultimately bland.

Partly, I think it’s a direct reaction to the way female characters were portrayed in media for so long–as love interests, as damsels in distress, as a long-legged maiden whose sole existence is to be a reward for the dashing male protagonist. But partly it’s also a slightly evolved variation of the male gaze. “Badass” women in skin-tight outfits, brandishing swords or guns. A titillation for men who want a little danger and oomf to go along with the long legs and cleavage. We see this countless times on the cover of paranormal books that star female protagonists. In 2012, SFF author Jim Hines sacrificed his poor body in order to reenact some of the more ridiculous poses women are seen doing in fantasy covers. The results were interesting to say the least (go check out the rest of his blog posts on women in covers here–they’re fun, insightful and brilliant). 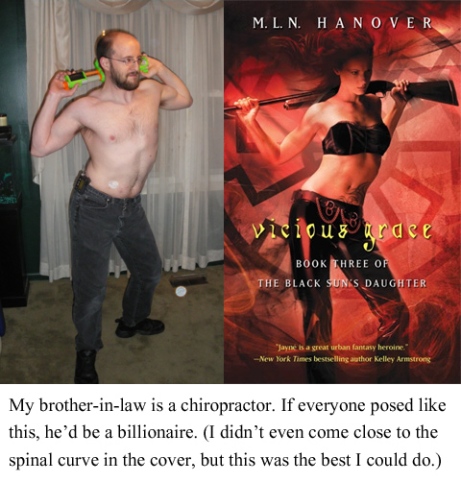 We also see it in video games, with ones like Metal Gear Solid 5 touting out its female soldiers in a bikini and a pair of fashionably-ripped tights because, according to game developer Hideo Kojima, she breathes through her skin (yes, you read that right).

I mean, just SAY that you want her to look sexy, dude.

And when it’s not a matter of the male gaze, it’s a case of many writers forgetting (or ignoring) that while strong and capable is all well and good, that can’t be all that a woman is–because a real woman has fears and weaknesses. It’s a case of swerving so far into the opposite direction of the damsel in distress, to “badass heroine,” and bypassing this massive, largely-unexplored territory in between the two extremes.

Finally, I think it’s also a mixture of all of these: men and women want to see physically strong female characters kicking down doors and wiping out enemies with casual flicks of their wrists. But maybe for different reasons–women love seeing physically strong women who can go toe-to-toe with their male co-casts; and men just enjoy asskickery in general (according to my friends, at least–male readers, feel free to weigh in).

So what led to this shift in perspective? One simple reason would be that I just gained more real-life experience. I met many different, incredible women during my undergrad years–many of whom were shy, soft-spoken, or non-athletic but I would still consider some of the strongest people I’ve encountered.

But it’s not until Vanessa Ives from Penny Dreadful came into the picture that I could pinpoint what was missing in these “strong female characters.” In my humble opinion, Vanessa is singularly the most complex female character to have walked on television and also happens to be my all-time favourite female protagonist in any media.

In the first episode, she’s the definition of what people would call “strong female character”– she’s confidence and cool and she strides through the world like she rules it.
But as the season goes on we see these layers stripped away. We see her oscillating from a terrified, guilt-ridden young woman to a goddess cloaked in sexuality and anger. We see her devotion to Catholicism war with her fascination and love with the occult. We see her hate herself even as she loves those who mirror her faults.

She’s frailty and strength both.

So I guess the bottom line is that I’m bored and tired of strong, 100% capable male characters and I’m equally bored of strong, 100% capable female characters. For me, “strong female characters” are ones who aren’t written with just a single label in mind–a damsel, a soldier, a princess, an assassin. The ones who are treated as normal people with human struggles and inner demons. You don’t need to wave around a sword, skulk around dark alleys brandishing knives, or make snarky quips to be strong. There are infinite shades of strength. And weaknesses are a part of it.

Now I pass the mic over to you. I absolutely love discussing these kinds of things (you’ll have to bash me over the head to get me to stop once I start going), so feel free to add your own thoughts and point out things I may not have considered.

Or you can just yell at me. I’m open to that too.

24 thoughts on “Then and Now: “Strong Female Characters””