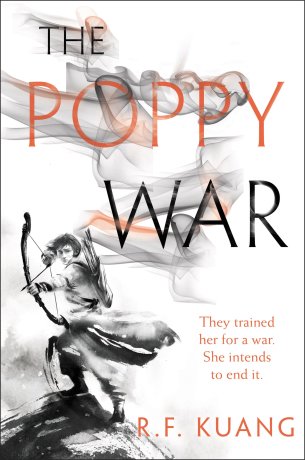 Was she now a goddess or a monster?
Perhaps neither. Perhaps both.

Before we get into the review, I would like to put out a Massive Trigger Warning: Much of this story is directly pulled from Chinese culture and history–specifically, the brutality and the mindset of the Sino-Japanese war. Chapter 21 (Part 3) features stark accounts of mass mutilation (of men, women, children, and infants), rape (one of the hardest I’ve ever had to read through), forced prostitution, and animal violence. If you’re sensitive to such subjects, for the sake of your mental health, please, please skip or skim this chapter. Beyond that, there’s genocide, human experimentation, drug use and addiction, and other senseless violence associated with war.

The Poppy War is obviously a very different story for Chinese readers (my reading buddy can attest to that). Though I’m acquainted with some of the culture through osmosis from my friends, and due to my own culture’s closeness with China, most of the references slipped by me. That isn’t to say you can’t understand or enjoy the book if you’re not of Chinese heritage; it just means that there are a few deeper layers to the story that you probably won’t be able to access.

The comparisons made to Name of the Wind are fully justified in the first half of the book. Throughout her years at Sinegard Academy Rin meets new friends, makes an enemy with powerful social connections, butts heads with a teacher who hates her, and steals books from the restricted section of the library (which always seems to a staple for fantasy school fiction). Plus, she’s taken under the wing of a teacher who reminds me a lot of Elodin from The Kingkiller Chronicle–mercurial, eccentric, and prone to assign unorthodox tasks as lessons (at least he never tells her to jump off a roof). It’s fun, lighthearted stuff, but there’s always an undercurrent of violence and unease running through it, which eventually erupts in the second half.

Rin is a fantastic protagonist–even at her worst, you can’t not fall in love with her. She’s the ultimate underdog and she scrabbles hard–so fucking hard–to get what she wants. Her determination to succeed at the academy leads to hilarious, intense, and disturbing sequences of events. Moreover, she actually sounds and acts like a teenager, which you don’t often find in adult fantasy–she sasses, she’s brash, and she makes a ton of mistakes. Her struggles will strike a chord with anyone who’s ever had to work twice as hard, twice as much, to obtain the same things that some people are just granted from birth.

The side characters are also interesting and varied in personality–Altan especially. The development of his relationship with Rin is probably my favourite part of the book. It starts off as an adoration, at least on Rin’s part, and companionship. Then it becomes this toxic echo chamber of anger and hatred and vengeance. It’s fascinating, terrible, and heartbreaking stuff, and I couldn’t tear my eyes away.

What I also love about this book is that it presents two enemies. One is obvious from the start: Mugen Federation, the small island nation to the east of Nikara. They’ve been imbibed with the drug that is nationalism and the belief that it’s their destiny to expand their borders and subsume Nikara.

I know many people didn’t like the second half part of the book, and for obvious reasons–it’s gruesome stuff. And I didn’t think I’d particularly like it either, but while I got little enjoyment out of it, I did find it to be the best part of the book. Because this is where our characters face hard truths and harder choices. This is the where Rebecca Kuang stares you in the eye and tells you that this story isn’t military fantasy–it’s real-life culture and history and the brutality of warfare infused with magic. It’s also where the second enemy rears its head: hatred and vengeance. I don’t want to go into detail because it’s something you need to experience for yourself, but the way Kuang slowly reveals how Mugen isn’t the enemy you should most be afraid of is rather quite masterful.

There are a few issues with the book that nagged at me. Uneven pacing is evident at the latter end of Part 1 and start of Part 2. As with many school-based stories, the lesson scenes tend to drag on, and there’s a lull in the transition from Rin-the-schoolgirl to Rin-the-soldier. My biggest pet peeve is Kuang’s tendency to hold the readers’ hand. She would describe a particular scene or a situation and then have Rin explain what it means. You can clearly tell from the dead bodies littering the ground that war is hell, so it’s unnecessary for Rin to literally spell it out in the next paragraph.

Despite its flaws, however, this is a fantastic debut. The Poppy War not only paints a stark portrait of imperialism, war, and destiny versus choice, it asks the question of what you do in the face of senseless evil. Do you meet atrocities with atrocities? And at what cost? What happens when one day you look in the mirror and see that you’ve become the very thing you’re fighting against?

Kuang leaves you with no easy answers and I don’t expect any in the near future.

~
Thank you to Edelweiss and Harper Voyager for providing a review copy.

And thank you to Alice for the buddy read! Go check out her review here.

13 thoughts on “Review: The Poppy War – Beautiful and Terrible in Equal Measure”