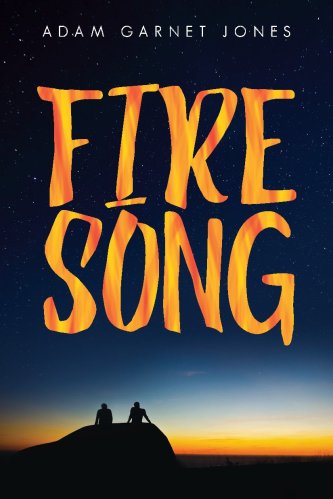 It’s been a while since I’ve read Canadian Aboriginal fiction. The last one had been Green Grass, Running Water from my highschool AP English class, which was…well, to put it kindly, definitely an experience. A bit of advice for English teachers? It doesn’t matter how brilliant you think a book is or how well-read and mature you think your students are. They’re still teenagers. If they can’t relate to the subject matter (hell, if they can’t even figure out what the subject matter is), they’re not going to get the most out of the book like you were hoping for.

With that immediate digression out of the way, let’s talk about Fire Song!

Fire Song was originally released into the world in the form of an indie film, written and directed by Adam Garnet Jones. Turns out the guy is super multi-talented because his first attempt at a novel isn’t too shabby either. The story stars Shane who’s lived in an Ontario reserve with his family all his life. Shane has his girlfriend, Tara, but in the past year and a half, a secret relationship began to bloom between him and a boy named David. Despite not being able to disclose his sexuality to his family and friends, the future didn’t seem all too bad for Shane. Then his sister Destiny committed suicide. And everything got flipped upside-down.

Shane is a likeable character (at least in the beginning–we’ll get back to this in a bit). His efforts to juggle a tragedy, two relationships, and the possibility of a higher education are easy to empathize with. You find yourself rooting for him to find peace and happiness.

The side characters weren’t all that well-developed, however. The problem is that this is such a short book and we only get small glimpses of most of them. Like David, for example. There’s little to him besides the fact that he’s Shane’s secret boyfriend and passionate about their ancestral culture. We don’t really get to see the qualities that made Shane fall in love with him in the first place.

But what I did love about these teenagers is that they do everything with so much intensity. They lust deeply. They love deeply. And they hurt and get hurt deeply. It’s a double-edged sword, this openness–this unrestrained energy–but it’s what I think defines teenagehood. And Jones does a terrific job of showing it.

I also loved the contrast between the prose and the subject matter. The latter is stark and refuses to shy away from heavy topics–sex, drugs, drinking, death. It could have easily become an overly grim story if not for the prose. There’s such a quiet, dreamy quality to the writing that not only balances out the harshness but softens it out to a manageable level.

Watching the fire grow, Shane feels the presence of his ancestors like an echo behind him. Generations that crouched near the flames and warmed their palms, one after another for tens of thousands of years. He wonders if white people ever feel something like that or if it’s just Indians who feel their past and present breathing into each other.

The writing is truly great. The author has no shortage of lovely metaphors to describe every emotion and senses.

I also really liked how the story educates you on what life in a rez might be like for  Aboriginal youth without sounding like a pamphlet. The injustice and setbacks that these kids face is depicted in the emptiness that follows Destiny’s death. In Shane’s struggles to help out his mother and pay his way to university at the same time. In the scrapbook of rez kids who have been murdered or committed suicide. In the anger that roils through Shane at the helplessness of it all. These are major issues concerning First Nations communities in Canada, one that the government has yet to fully address, and Jones presents them well with a lot of heart and raw emotions.

“But, Kathy, it sounds like you have a truckload of praises for the book. Why the shitty score?”

First of all, 6.5 is not a bad score. Secondly, I did (do) have a lot of praise for the book. But then I got past the halfway mark and things started to…unravel a bit. The chapters alternate from Shane’s POV to chapters that are solely diary entries by Tara. From the start, I’m wasn’t too keen on the latter. It felt like cheating–telling what the character’s really feeling without having to actually show any of it in Shane’s narrative. Then out of  nowhere comes this one scene near the end, and without getting into spoilers, it was clear that showing so little of Tara outside of her diary was a detrimental decision.

From there, the pacing takes a nose-dive and things turn crazy hectic. Shane’s personality is all over the place. One minute he’s snuggling with David and the next he’s pushing him away and planning the world’s worst amateur heist and physically threatening an old woman. And all of this is supposedly happening within a span of few days. I felt majorly whiplashed; it seemed like there was a large chunk of segue missing between the middle and the end of the story.

The ending is a hopeful one, though, which I appreciated. And, all in all, I do love the spotlight shone on the LGBTQ Aboriginal youth of Canada. It’s an important story, to be sure, with some issues of execution. My hope is that stories like these pave the way to similar ones in Canadian literature in the future.

~
This is an honest review of an ARC provided by the publisher.